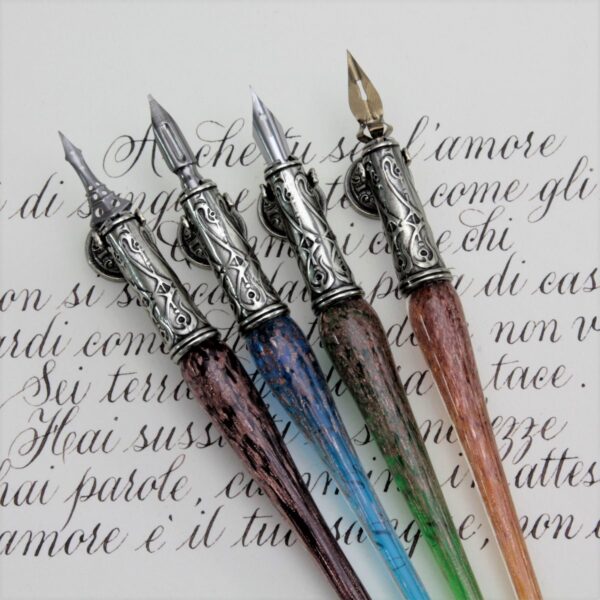 A handcrafted calligraphic pen intimately linked to the place from which it comes and its traditions.

SET07 Alvise calligraphy pen is made in Venice and is suitable for all those who enjoy handwriting fine point calligraphy.

Alvise calligraphy pen ideal for dabbling in various writings, including English calligraphy thanks in part to the different nibs.

The calligraphy pen is sold in an elegant gift box with gold logo.

Elegance and exclusivity for a calligraphy pen that will represent you on your desk.

Perfect pen for practicing the art of forming letters with beauty and grace, a passion shared worldwide with many calligraphers.

The first important step is to learn the rules to be applied consistently and to become familiar with the tools of calligraphy.

Before we can start forming our letters, we need to learn more about the art of calligraphy,

going back in time to the late seventh century, when the quill first appeared.

The quill pen tip, used for more than a thousand years, was cut in different ways for the various styles of truncated-point writing,

this led to the invention of the metal nib in the early 1800s with the birth of industry.

Alvise calligraphy pen SET07 we can divide nibs into three categories according to their specific use: The fine tip nib for English writing,

the special feature of this nib is the flexibility given by the shape and the slit that widens with pressure.

As a piece of furniture or for writing important words, this unique Murano glass calligraphy set filters the light of ancient Venice.